The entire vineyard of the Cognac Delimited Region, is made up of approximately 6 200 exploitations producing Charente white wine that is intended for distilling in order to produce mainly Cognac. The vine that is largely in the majority is the vine of Ugni Blanc. Certain older vines remain very insignificant such as the vines of “Folle Blanche” or “Colombard”.

Ugni Blanc is preferred to the other vines because it offers a good resistance to diseases and to grey mould. Furthermore it has qualities that adapt very well to distillation;  it gives a wine with a good rate of acidity and a generally low degree of alcohol - two very positive elements for good Cognac.

Since the end of the XIX century, following the phylloxera crisis, all the vines in use are grafted onto rootstocks selected to obtain better results according to the types of ground. 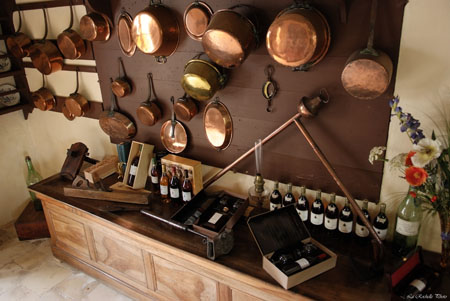 As in other vineyards, certain wine growers continue to harvest the grapes by hand.  The grape harvests can begin as soon as the grape reaches maturity, generally at the beginning of October and ending at the end of the month. All types of pruning are authorized but one most used is the "Guyot double".

Immediately after the harvest the pressing of the grapes is done in traditional horizontal tray wine presses or in pneumatic wine presses. The continuous presses with Archimedes' screws are forbidden. The juice obtained is immediately fermented. The addition of sugar, or chaptalization of wine, is forbidden. These stages of pressing and fermentation are followed carefully because they determine the final quality of Cognac.

Wines obtained after fermentation of about three weeks are around 9 % vol.  Slightly acid and with a low level of alcohol they have specific qualities that are perfect for distilling which should obligatorily be finished at the latest by the 31st of March following the harvest.